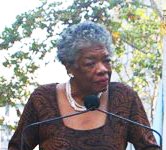 Maya Angelou Biography: Maya Angelou is a notable American poet and author. She is most well known for her series of autobiographical books that tell the story of her life from childhood into early adulthood. Those years covered the Great Depression through the Civil Rights Era.

A Maya Angelou biography reads like an American history lesson since she lived during such a pivotal time and was active in current events of the day. In her books, she also shares her struggles with racism, single parenthood, and her search for identity.

When she was three years old, her parents split up and sent the young Mays and her brother to live with their grandmother. The grandmother owned a profitable general store and was one of the few people living a prosperous life during the Great Depression.

When Maya Angelou was eight years old, she was sent back to live with her mother. Her mother's boyfriend sexually assaulted Angelou and he was later murdered, presumably by one of Angelou's uncles. The incident left Maya Angelou mute for a period of years.

According to a Maya Angelou biography written by Marcia Ann Gillespie, it was during this time of silence that Angelou developed her love of literature and her sense of introspection. A teacher introduced Angelou to classic works of literature, and that helped her to recover and eventually speak again.


Angelou held a variety of jobs once she entered adulthood. She worked as a streetcar conductor, prostitute manager, singer, dancer, and cook. She was a single mother, struggling to raise a son alone with no education or training for a career. She also had to fight racism that was prevalent at the time. Eventually, she became a popular nightclub singer and dancer, and even put out an album.

In 1959, Maya Angelou moved to New York and joined the Harlem Writers Guild where she met notable African-American writers that influenced her work.

In 1962, Angelou moved to Africa with her son to explore her African roots. While there, she met Malcolm X and helped him with his civil rights cause. Her son remained in Africa when she decided to return to America.

Once back in the United States, Angelou stayed active in the civil rights movement and began her writing career in earnest. 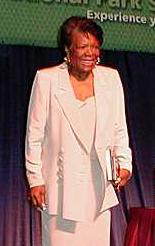 Maya Angelou lived during some of the defining moments in modern American history. Race, motherhood, and the search for self, became common themes in her work.

Her autobiographies became bestsellers, and are found in many schools today. They tell the personal story of a strong creative girl who grew up in one of the most tumultuous periods of American history. Her life was equally tumultuous, but she eventually found fame and recognition for her creative spirit.

Angelou has received numerous distinguished awards for her writing and her contribution to American culture. In 1993, she was chosen to recite one of her poems at the inauguration of President Bill Clinton. The notoriety she received as a result of this honor, introduced her to a new generation of readers, and reignited her popularity.

Maya Angelou continues to write poetry books and has several collections in print. Angelou is also known to be a very accomplished cook and has two cookbooks on the market.

She has been a university professor, actor, and film director, and she maintains a very active lifestyle as a lecturer and political activist. More importantly, she has been an inspiration to millions of her readers.

As pretty much any Maya Angelou biography shows, she overcame great adversity and went on to live a spectacular and fulfilling life.